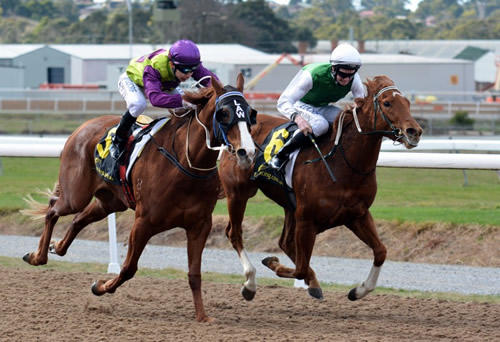 Courtesy of tasracing.com.au - 23/08/15. ONE of the smallest horses to race in Tasmania for many seasons emerged triumphant in the opening event at Spreyton today.

Microsecond (Strategic Maneuver – Milliseciond) was having her second raced start in the ABN Group 3YO Maiden over 1000 metres in which she was well backed to start the second elect behind Gee Gees Blondie.

Apprentice Boris Thornton had Microsecond on the trail and in front soon after the start while team Wells' stable apprentice Victor Wong was content to have the favourite Gee Gees Blondie camped outside of the leader to the home turn.

Gee Gees Blondie gained the upper hand close to home but Microsecond refused to wilt and fought back to grab victory in the shadows of the post.