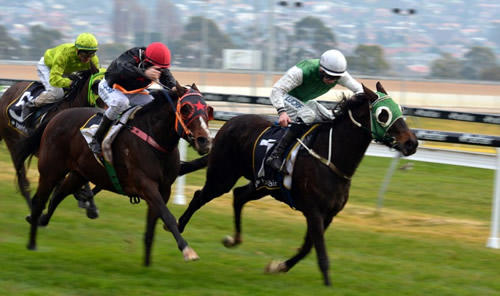 Courtesy of Tasracing.com.au - 13/07/15. SCOTT BRUNTON all but wrapped up the 2014-15 Tasmanian trainer's premiership by training half the card on the eight event program at UBET Park Hobart on Sunday.

Brunton's four winners took his season tally to 58 to leave him seven clear of his nearest rival Adam Trinder with only two meetings remaining.

Winning premierships is nothing new to Brunton as he has shared the title with his father David for the past six seasons but when David opted to go into semi-retirement last year Scott stepped out on his own.

His first winner on Sunday was three-year-old filly Extended Warranty making her Tasmanian debut. Jockey, David Pires ensured she was given the run of the race and she delivered the desired result.

The former Victorian is from the Greg Eurell stable and landed in Brunton's care as a result of a few prominent stable clients looking for a young horse to add to the team.

Aquila Reale ended a string of minor placings when she delivered the goods in the Unite in Pink Dash 2YO and Upwards Maiden over 1400m with Damian Thornton aboard.

Thornton had Aquila Reale perfectly placed third on the rails to the home turn where he eased her out and she finished the race off as expected.

Vigilante delivered a bold first up performance with Boris Thornton in the saddle to win the class four handicap and Pires made it a book end double when he guided Brunton's handy six-year-old Tiger Jack to an impressive all the way win in the Transport to Treatment BM72 handicap over 1400 metres.

Listen to what trainer Scott Brunton had to say about his first two winners and his slant on winning the premiership.