Royal Rapture to be aimed at Jack Frost 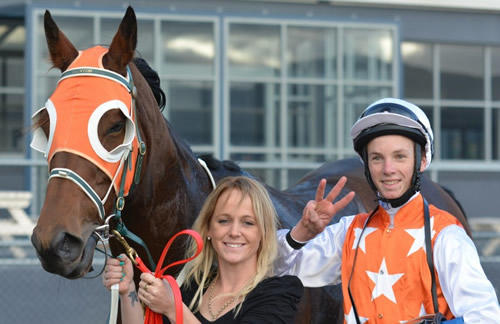 Courtesy of Tasracing.com.au 12/04/15 - PREMIER trainer Scott Brunton will aim his smart sprinter Royal Rapture at the $25,000 Jack Frost Quality Handicap to be run at The TOTE Racing Centre in Launceston on Wednesday week following his impressive victory in a Benchmark 82 over 1000 metres in Hobart today.

Royal Rapture (Boris Thornton) settled just off the speed that was set by stablemate Devil's Tears while the other stablemate What Life Brings settled second and one-off the fence.

Devil's Tears put two lengths on the opposition at the top of the straight but when Thornton guided Royal Rapture through a gap 200 metres out he dashed to the leaders and then staved off a late charge from Grey Gown to defeat that mare by a narrow margin.

Brunton was thrilled with the win and paid tribute to all three of his runners in the race.

"Royal Rapture is a very good horse and I think he showed that again today," Brunton said.

"He has been very competitive against good quality horses and today's effort was outstanding."

"He'll go to the Jack Frost at the last night meeting of the season in 10 days time and then we'll look at a couple of other targets," he said.

Devil's Tears was ridden by David Pires who rated the mare superbly but she was unable to resist the finishes of her stablemate and Grey Gown that again produced a super first-up efforts.

What Life Brings was game in finishing fourth but he just knocked up the last 100 metres and will be much improved from the outing.

It was the last leg of a winning treble for Thornton who also scored aboard The Producer for John Blacker and two-year-old Gee Gee Red Prince for Stuart Gandy.

Kyle Maskiell also rode a treble with his wins coming aboard Settler's Stone for John Blacker, Blu To Be Sure for Scott Brunton and the Graeme McCulloch-David Keating-trained Cannon Man that was having it's first start in the state.