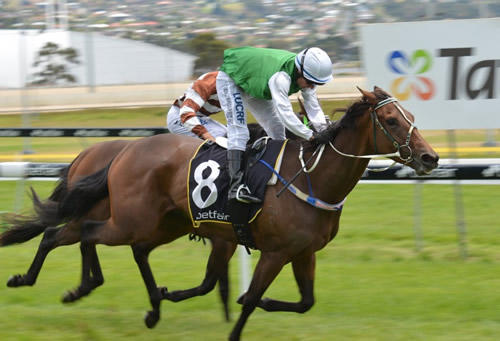 Courtesy of tasracing.com.au - 25/01/15 - THE connection s of promising staying mare Perplexing are likely to take a path to the Night Cup at The TOTE Racing Centre at Mowbray next month in an attempt to qualify the mare for a berth in the Betfair Launceston Cup.

Perplexing demolished a handy field in a benchmark 62 Handicap over 2100 metres at Tattersall's Park in Hobart today, after which trainer Scott Brunton revealed to his owners the plan to head to the Launceston Cup.

"I've always had a soft spot for this mare and to see her doing what we always thought she could is tremendous."

"We thought she was a Tasmanian oaks prospect last season and we had her entered for the Strutt Stakes (lead-up race to Oaks) on Hobart Cup day when the meeting got postponed and when it was re-run a few days later she had gone sour so we had to tip her out for a spell."

"Today she was put in a terrific spot in the run by the jokey (David Pires) and when she turned for home we al knew she would win she was going so well," he said.

The Sydeston Night Cup will be run over 2100 metres in Launceston on February 18 (Wednesday night meeting) with the Betfair Launceston Cup to be run a week later over 2400 metres.