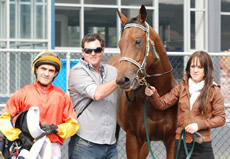 Courtesy of www.tasracing.com.au
WELL bred filly Ishbelle delivered on a promise when she scored an emphatic win in the Peter Binney Surveys 3YO Maiden Plate over 1100 metres at Tattersall's Park in Hobart today.

The filly went into her first race on the back of a trial in which she scored by over 17 lengths on March 4 and that led to her being backed in to start the $1.40 favourite.

She was partnered by David Pires who used her early speed to lead but she was pressured from the 800-metre peg to the home turn by Dubawi Diamond and then Eternal Dream that sat three-wide to apply pressure.

But Ishbelle (Danbird-Miss Molik x Magic Albert) made light of the task.

When Pires called on her to extend she quickly put three lengths on her rivals and went on to win by almost six lengths from Huss Style with Porto over five lengths away third.

Ishbelle is prepared by David and Scott Brunton at SevenMileBeach where she has been in work for about five months.