Am I There Yet shows staying prowess 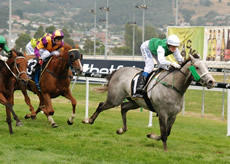 Courtesy of www.tasracing.com.au
WHEN Am I There Yet arrived at David and Scott Brunton's stables last year there was no real expectations other than to try and win a race with the well-bred grey gelding.

He showed them a bit leading up to his first Tasmanian start so connections had a sizeable wager at big odds but he missed the start by many lengths and flashed home to run fourth.

Not the start everyone expected but since then the gelding has gone on to win five races in his adopted state with the latest coming last Sunday in a benchmark 62 handicap over 2400 metres.

With talented apprentice Chantal Willis in the saddler, Am I There Yet was sent around the field three-wide without cover midrace and was stuck there for the duration but it made no difference to the outcome as the gelding powered to the lead turning for home and scored a convincing win.

"He is a very good galloper that's won five races for us so he's certainly paying his way," Scott Brunton said after his latest win.

"We might have underestimated him a bit because he seems to be getting better with racing," he said.

Am I There Yet looked strong at the end of the 2400 metres last Sunday and while there are no firm plans to try him out in a feature race it might be worth having a throw at the stumps in the Betfair Launceston Cup.

"Winning a BM62 in Hobart is a long way from tackling a Launceston Cup but bin saying that the horse can stay, he's proven that, but we'll just have to wait and see how he is in the next couple of days as to where we go with him next," Brunton said.