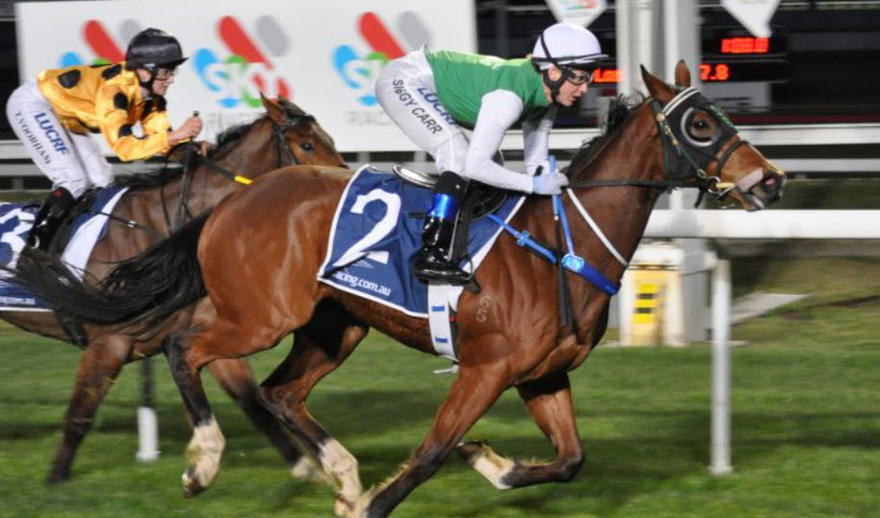 Trainer Scott Brunton has his eyes on the Tasmanian Derby with 3YO The Inevitable which was an impressive winner in Launceston on Tuesday night.

Having just his second race start, The Inevitable was heavily backed and although the margin was narrow, the win pleased Brunton.

“The leader gave a good kick but and he chased it down nicely, he was probably a little underdone for tonight but he’s probably going to be one of the states best three-year-olds,” Brunton declared.

Jockey Siggy Carr was also full of praise. “He could have won by seven lengths but he has a lot to learn, he’s got a lot of upsides.”

The win was the first of a treble for Carr who also scored on Flash Missile and Secret She Has.

The Inevitable was a $100,000 purchase at the Adelaide Magic Millions sale.

Brunton intends to give the youngster a let-up before setting him for some feature races including the Derby over the summer carnival.

Shaun Nichols trained his first winner when Sh’Bourne Rebel took out the opening event. Ridden by Teagan Voorham, Sh’Bourne Rebel held off a late charge from White Gazelle, the heavily backed favourite With No Name was third.

Following on from his treble in Hobart on Sunday, Troy Baker produced a gem of a ride to get The Greatness home.

Starting from barrier nine, Baker guided The Greatness up along the rails to beat Gee Gees Cricket with American Sunday putting in an eye-catching run for third.

Photo: Courtesy of The Examiner