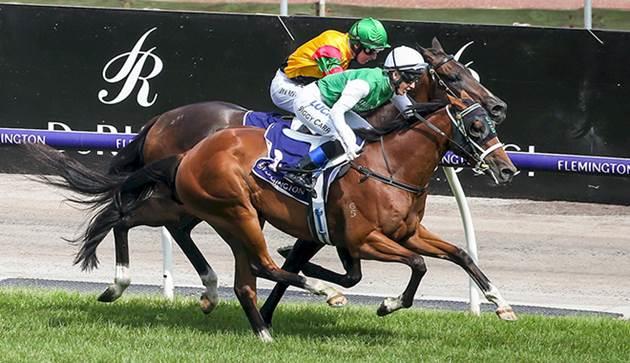 Tasmania might have another star in Melbourne this autumn following the impressive C.S. Hayes Stakes victory of pint-sized galloper The Inevitable at Flemington on Saturday.

The big stables had been dominant at the course's first Group 1 meeting for the year until unheralded rider Sigrid Carr punched home the three-year-old for Tasmanian trainer and long-time friend Scott Brunton in the lead-up race to next month's $1 million Australian Guineas.

Brunton had won races at Flemington before with the likes of his star Hellova Street but for the jockey, it was a victory to be cherished and remembered forever.

"He's a tiny little horse - probably just 14.3 (hands) but he's got the talent there as he showed today and it's a big buzz to be part of it," Carr said after the race.

"It's just a massive, massive thrill. Just to have the ride on him today was big enough for me.

"Honestly, I am a bit in shock over it all because he just felt the winner from the 600 and to have that feeling and be able to soak that up on a big stage like this is just unbelievable."

The Inevitable was travelling so well, Carr decided to let him slide up to the leader Age Of Chivalry with about 400m to go.

"I didn't want to get there that early but I was in a predicament there that the saddle was going more and more forward if I was trying to hold him back slower, so I had to roll with him.

"It would be my biggest win. I've won Group 3 races in Adelaide and Tassie but this one sits right up there. Even to ride a winner at Flemington would have been amazing let alone a Group 3."

Carr said she had known Brunton for as long as she can remember. "I grew up with Scott. We were kids together and that makes it even more special that we've been able to do it today."

The ride on The Inevitable was just Carr's second at Flemington.

"I had one ride as an apprentice here but we won't talk about that ride," she quipped.

Brunton was nearly smothered as part-owners threw themselves at him to hug him after the race.

Brunton said Carr would retain the ride in the Australian Guineas on March 2.

"It's a winning combination and why change it? It gives the win a bit more meaning," he said of his long friendship with the rider.