Mandela Effect wins 3 & 4YO Magic Millions Classic in a breeze 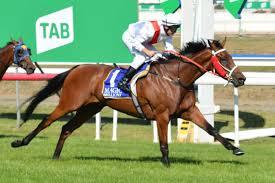 MANDELA EFFECT proved to be a great advertisement for today’s 2019 Tasmania Magic Millions Yearling sale in Launceston by scoring an emphatic win in the combined $65,000 3 & 4YO Tasmanian Magic Millions Classic at the TAB Racing Centre yesterday.

The Scott Brunton-trained four-year-old gelding produced a sensational last 600m to come from last to score easing up from Bosporus and Tale of the Fox.

Brunton said the gelded son of Turffontein that cost only $18,000 at the Tasmanian Magic Millions Yearling sale two years ago, was destined for greater things.

“I thought it was a fantastic effort today because he’s backed up only two weeks after his first-up win over 1100 metres that was a very taxing run,” Brunton said.

“I know he never wins by a very big margin but that’s because he waits for them after he’s hit the front but he is still learning his craft and I believe he is the real deal.

“He’s a pretty special horse and we’ll get to see that a bit further down the track.

“I’ll get him into a benchmark 90 race or two in Melbourne where he’ll get some weight relief and it won’t surprise me if he is contesting a feature trace over there (Melbourne) in the not too distant future.”

Top rider Jason Maskiell had Mandela Effect settled last but always travelling in cruise mode but when he eased the gelding four-wide to make his move 600m from home he edged his way into the race and when he had the leaders in his sight he forged clear and went on to score by over a length from Bosporus with Tale of the Fox a length astern.