Jeremiah takes out Classic in style 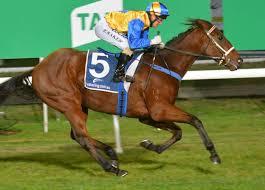 Premier trainer Scott Brunton has always had a big opinion of well-bred gelding Jeremiah and in Launceston on Wednesday night the son of God’s Own delivered a brilliant first-up performance to win the ANZAC Remembrance $50,000 3YO Autumn Classic over 1400m.

Jeremiah ($5 into $4.20) went into the race first-up off a three-month break but made light of the task to score an effortless win over Diesel Dan and Mountain Music that led the field to well into the home straight.

When rider Troy Baker called on Jeremiah for the big effort the gelding claimed the leader and had no trouble fending off a determined challenge from outsider Diesel Dan ($16) that flashed home along the rail with Mountain Music a game third ahead of Gee Gee First Story.

It was a brilliant training effort because the gelding missed a start leading up to the Autumn Classic when he sprung a shoe at the racetrack and had to be scratched and he also went into last night’s event without having had a trial.

Jeremiah was bustled from the barriers to land outside of the leader Mountain Music while the favourites Gee Gee True Story and Alinjer settled third and fourth respectively to the home turn.

Baker was thrilled with the win.

“I’ve had a bit to do with this horse riding him in his grass work and a few gallops and I was really looking forward to this race tonight,” Baker said.

“Knowing the issues Scott has had with this horse just to get him to this race makes it quite an amazing training effort.

“I reckon this horse is the real deal and he is going to be even better next prep.”