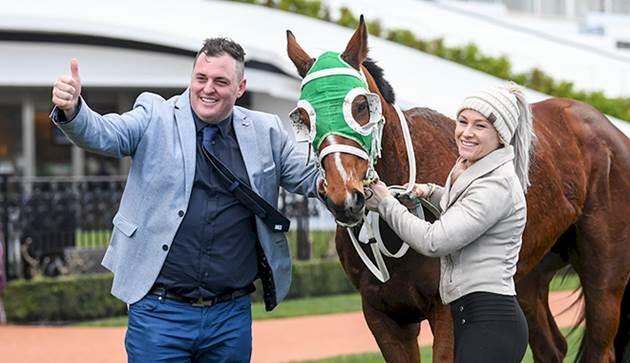 They've conquered The All-Star Mile with Mystic Journey and now Tasmania will chase victory in another rich pop-up race in Sydney with talented galloper The Inevitable.

Scott Brunton's stable star returned to the track in devastating style at Flemignton on Saturday, edging out $1.75 favourite Assertive Approach to win first-up over 1000m.

Brunton, who decided to bypass the Aurie's Star Handicap (1200m) in favour of the shorter first-up option, said the son of Dundeel would return to Tasmania before travelling to Sydney for October's Silver Eagle (1300m) in October and the $7.5 million Golden Eagle (1500m) in November.

A winner of the Listed Tasmanian Guineas (1600m) and Group 3 C.S. Hayes Stakes (1400m) as a three-year-old, Saturday's success was The Inevitable's sixth win from eight career starts.

"He's a serious racehorse this, don't worry about that," Brunton said.

"We were getting him ready for the Aurie's Star.

"Me and Teegs (partner Tegan Keys) have been over at Cranbourne with a few horses and she went back to do a bit of work with him and thought that he was maybe lacking a bit of fitness.

"So we dropped him back to the 1000m, sold it to the boys that we'd have a bet and it's worked out very good."